Following its success in the West End, Las Vegas, on Broadway and around the UK, Million Dollar Quartet is back!

Following its success in the West End, Las Vegas, on Broadway and around the UK, Million Dollar Quartet is back!

This worldwide smash-hit musical is inspired by the famous recording session that brought together rock ‘n’ roll icons Elvis Presley, Johnny Cash, Jerry Lee Lewis and Carl Perkins for the first and only time.

On December 4, 1956, these four star musicians gathered at Sun Records in Memphis, the studios of legendary record producer Sam Phillips, for what would be one of the greatest jam sessions of all time. Million Dollar Quartet brings that legendary night to life, featuring a score of rock hits including Blue Suede Shoes, Fever, That’s All Right, Sixteen Tons, Great Balls of Fire, Walk the Line, Whole Lotta Shakin’ Goin’ On, Who Do You Love?, Matchbox, Folsom Prison Blues, Hound Dog and many more.

Re-joining the production as the ‘Father of Rock’n’Roll’ Sam Phillips, is national treasure Peter Duncan. Following rave reviews for his performance in the musical’s 2017 UK tour, the Olivier Award nominee and former Blue Peter presenter returns to the stage in 2020.

Don’t miss your chance to discover the true story of one unforgettable night that made rock’n’roll history!

Groups of 10+
All tickets £29.50 on bookings of 10 or more, with one free ticket per 20 seats booked. Available on Stalls and Upper Circle seats on Tuesday-Thursday 7.30pm, plus Wednesday 2pm performances. Please contact our Group Sales team to book.

Concessions are not available in the Balcony, or on Friday 7.30pm or Saturday 2.30pm & 7.30pm performances. 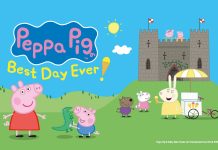 Opening at Curve, Leicester ahead of further UK venues and a London Season. Produced by Jamie...

The Brilliant Original production of Andrew Lloyd Webber‘s The Phantom of the Opera is embarking...

Friendsical, the parody musical by Miranda Larson is back in 2020 opening at the Churchill...

The Woman In Black

A lawyer obsessed with a curse that he believes has been cast over him and...

Under 14s must be accompanied by an adult aged 14+ Bowie Experience is a spectacular concert...

Anton & Erin, the nation’s favourite ballroom stars are back with their brand-new show for...