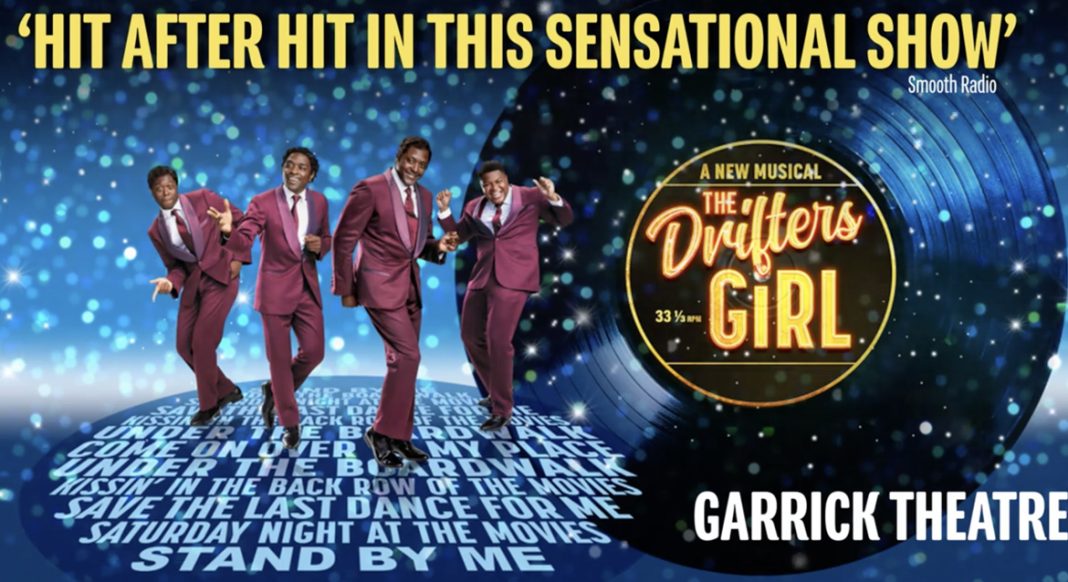 Hit songs include Stand By Me, Saturday Night at the Movies, Under The Boardwalk, Save The Last Dance For Me and Kissin in the Back Row of the Movies

Booking through to February 2023 at Garrick Theatre, London

If, like me, you are thinking ‘Hmmm The Drifters, I know a few of their songs from the radio, they’re good but…” lost in time, not sure who was in the band.

Well, I can assure you, from the moment the curtain goes up you are immersed, open mouthed, in awe of the talent on stage and grooving in your seat (even if in a slightly reserved British way). I wasn’t sure what to expect from this musical but in truth the songs and performances from all 6, yes only 6, of the cast are outstanding. The Drifter’s Girl zips along and tells the untold story of Faye Treadwell (Felicia Boswell) who overcame gender inequality and racial prejudice to succeed as the manager, producer and promoter of The Drifter’s. It is ‘kind of’ narrated by her young daughter (Tina, brilliantly acted by 11 year old Savanna Musovi), who wants to understand more about her mother and father’s life (George Treadwell, played by Adam J Bernard). The Drifter’s back catalogue is interwoven throughout with extra songs performed by Felicia, in her west end debut, which were Powerhouse with a capital P. An Emmy winner and Grammy nominee she brought her broadway sass to The Garrick Stage and belted out her solos to rapturous applause.

The Drifter’s group: I don’t have enough glowing superlatives to say how impressive these 4 guys were. The Drifter’s cast were Adam J Bernard, who also played the role of George Treadwell (plus others), Tarinn Callender (Johnny Moore, Gehart Thrasher & others), Matt Henry (Clyde McPhatter, Lover Paterson & others), and Tosh Wanogho-Maud ( Ben E King, Rudy Lewis & others). Together their performances were faultless, the energy, the connection to the audience, the harmonies, choreography, acting, all performed to perfection and brought the house down with every song. The Drifter’s quartet, not only acted the roles of different members of the band through time but also cameo roles dotted throughout, with great comedic timing and even Bruce Forsyth made an appearance! I can’t choose an outstanding performance from this quartet as they are all equally gifted, charismatic and together their combined voices left the audience uplifted with their joyous renditions of all The Drifters hits.

My only qualm: “Spoiler alert” was the live band, which had been hidden away at the back of the stage throughout the whole show, only to be revealed to the audience at the very end.. I was slightly disappointed that I didn’t know sooner so I could have appreciated them too!

A full house standing ovation, which brought 11 year old Savanna to tears, I would thoroughly recommend this musical to everyone, it’s a great family show, great music and incredibly talented cast. You can’t beat a live show and can really appreciate the voices, enthusiasm and energy from the cast that went into every second of this show in this intimate West End theatre.

I took my 23 year old daughter. Getting younger people into theatre can be a challenge, but she said she would definitely recommend this show to her friends. She realised she knew all the Drifter’s songs, was really impressed and had a great night out.

Credit must also go to the set designers, lighting designers for slick changes which took us on the journey through the decades as the story unfolds. The costume design was excellent.

I think I watched the whole performance with a smile on my face, quietly tapping my foot although I really wanted to leap up and dance in the isles!

A sensational show, a fantastic night out. Love, love, loved it ⭐️⭐️⭐️⭐️⭐️ Artspod.net

Felicia will play Faye Treadwell, the legendary manager of The Drifters, who, alongside her husband, fought for three decades to turn Atlantic Records’ hottest vocal group into a global phenomenon.

Felicia is a multi award-winning star, including an Emmy Award winner and Grammy Award nominee for Jesus Christ Superstar Live. Her Broadway credits include Motown The Musical, Shuffle Along and Memphis, the latter of which saw her win her second Helen Hayes Award. Full biography at www.feliciaboswell.com

The Drifters Girl has been thrilling audiences since beginning in Newcastle in October 2021. The show transferred to London in November 2021, and has continued to play to packed houses and nightly standing ovations. It is booking through until 12 February 2023.

From the highs of hit records and sell out tours to the lows of legal battles and personal tragedy, The Drifters Girl charts the trailblazing efforts of the world’s first African American, female music manager and how she refused to ever give up on the group she loved. Thirty years, and hundreds of hit songs later, there is no doubt that Faye Treadwell was and always will be, The Drifters Girl.

Adam J Bernard exploded into the West End limelight when he originated the role of Jimmy ‘Thunder’ Early in Dreamgirls, for which he was awarded an Olivier Award for Best Actor in a Supporting Role in a Musical.

Tarinn Callender originated the roles of Hercules Mulligan and James Madison in the West End production of the international musical phenomenon Hamilton. His other credits include the Olivier Award winning production of Come From Away.

Award-winning actor, singer, songwriter and artist Matt Henry won an Olivier Award for Best Actor in a Musical for his performance as Lola in Kinky Boots, for which he also received a Grammy Award nomination for the London cast recording.

Tosh Wanogho-Maud played Jimmy in the West End musical Dreamgirls. His other West End credits include Show Boat, The Book of Mormon and playing the role of Simba in The Lion King.

The Drifters Girl boasts an incredible soundtrack of some of the most famous songs in history, including Save The Last Dance For Me, Under The Boardwalk, Kissin In The Back Row Of The Movies, Stand By Me, Come On Over To My Place, Saturday Night At The Movies and many more.

The Drifters Girl, with a book by Ed Curtis, based on an idea by Tina Treadwell, and which is co-created by Beverley Knight, Adam J Bernard, Tarinn Callender, Matt Henry and Tosh Wanogho-Maud is directed by Jonathan Church, with set design by Anthony Ward, choreography by Karen Bruce, costume design by Fay Fullerton, orchestrations and musical supervision by Chris Egan lighting design by Ben Cracknell, sound design by Tom Marshall and video design by Andrzej Goulding. Associate Director is Tyrone Huntley and Associate Choreographer is Myles Brown with casting by Stuart Burt and children’s casting by Jo Hawes.

The Drifters Girl is produced by Michael Harrison and David Ian.

Booking through until Sunday 12 February 2023