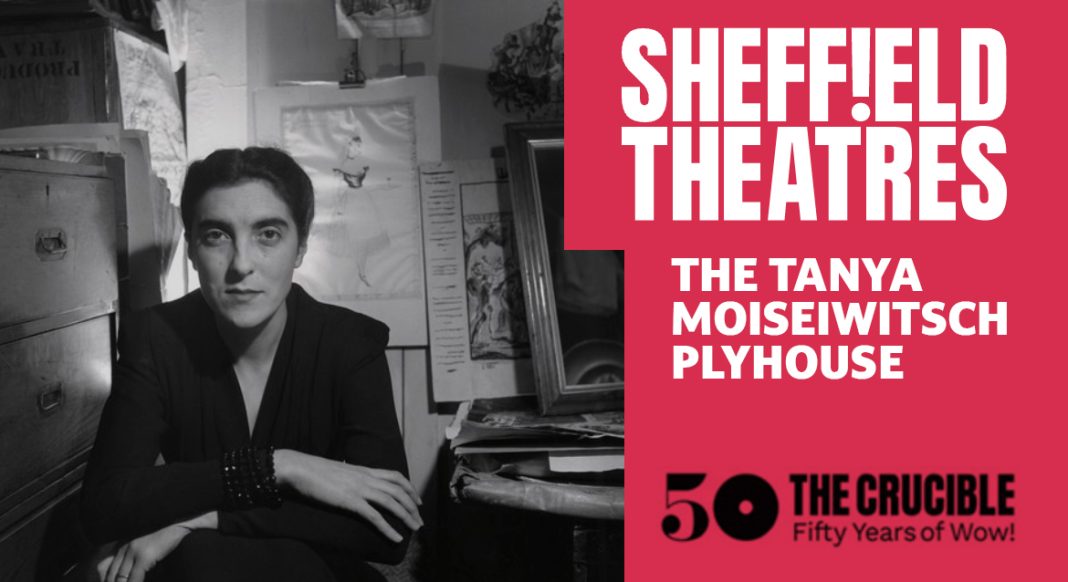 Sheffield Crucible Theatre has announced that the venue previously known as the Studio theatre will now be named the Tanya Moiseiwitsch Playhouse in honour of the hugely influential theatre designer that had an essential role in the creation of the Crucible complex.

Since November we’ve been celebrating 50 years of the Crucible and Studio theatres. What better time to shine the spotlight on this wonderful 400-seat theatre that has created some of the most memorable moments in our history.

This new name honours our past as we look to the next 50 years!

“Tanya Moiseiwitsch was a pioneer. Innovative, imaginative and a ground-breaker in her profession. Tanya created radical theatre shapes now enshrined and cherished in theatre buildings all over the world. Without her vision, neither the Crucible nor the newly named Playhouse would exist in the forms they do. Hers is an incredible legacy.”

This new name also honours the original Sheffield Playhouse, a 540-seat converted Temperance Hall, closed its doors in 1971 when the company moved to Sheffield’s new theatre. The forerunner to the Crucible’s success, it too had a reputation for bold, adventurous, and revolutionary productions, under the leadership of inaugural Crucible artistic director Colin George.”

This theatre has played a part in the career of so many beloved artists and creatives. Over the 50-year history of the space, audiences have enjoyed performances from hundreds of actors, from professional debuts to famous faces including Victoria Wood, Alan Rickman, Tracey Bennett, Shaun Parkes, Niamh Cusack, Richard Wilson, Stephanie Street, James Norton, Chetna Pandya and Rose Leslie.

Niamh Cusack, who appeared in Brian Friel’s Afterplay in 2014 in the former Studio theatre:

“Oh how I loved standing backstage at the Studio, waiting for my cue light in Afterplay. I could hear the audience. And then the intimacy of sharing that magical play, in that space. A shared secret between us. It was a lovely way to meet Sheffield!”

“Tanya Moiseiwitsch’s work on the Crucible Theatre was ground-breaking but, for a long time, her impact was behind the scenes. My father, Colin George, talked about Tanya’s genius yet it was only while working on Stirring Up Sheffield with Tedd, did we realise how significant she was to the creation of the Crucible’s design and that of the studio space.”

“The shape of the Crucible’s thrust stage was Tanya’s creation, and the studio is a smaller version of that unique performing space. Tanya was a beloved member of the company and an inspiration for so many designers and women in the performing arts. The Sheffield Playhouse, the predecessor of the Crucible, is still remembered fondly by so many of us. The naming of the Tanya Moiseiwitsch Playhouse clarifies the connection between the Playhouse and the Crucible and ties together 100 years of Sheffield theatre history, recognising Tanya’s long-lasting impact on theatre design. Naming a theatre after Tanya would have pleased Dad enormously. Congratulations to Sheffield Theatres and all the supporters of Sheffield’s newly named Tanya Moiseiwitsch Playhouse.”

Whats on at at The Tanya Moiseiwitsch Playhouse

What's on in Yorkshire?