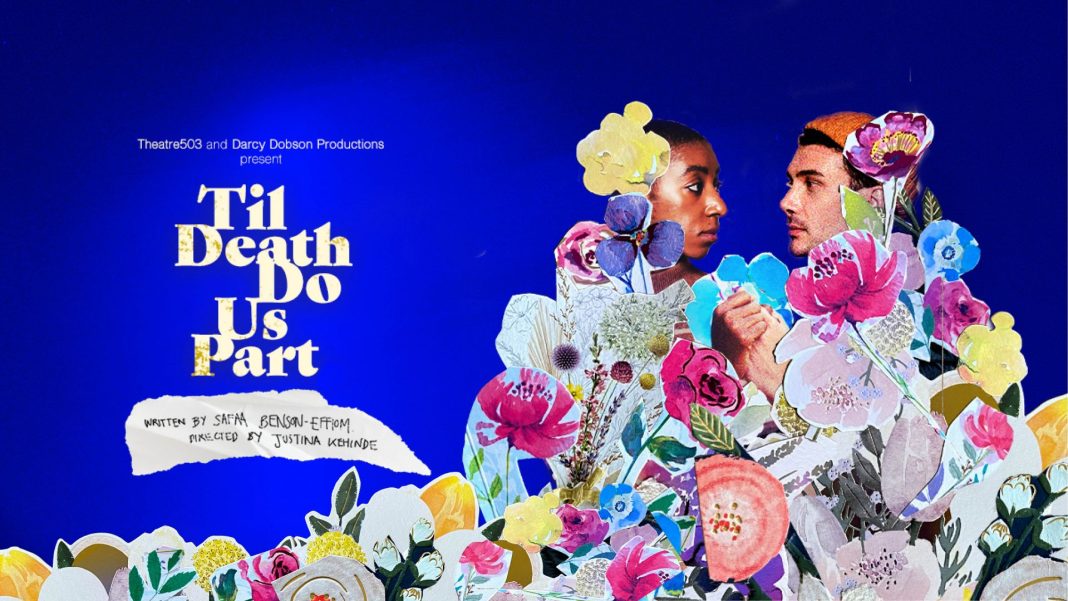 Til Death Do Us Part

After 15 years of marriage, Daniel and Sylvia find themselves drifting further apart with each passing day. Until one morning, they find themselves abruptly united by every parent’s worst nightmare…

The shoes have been polished, the vases are full and the phone is ringing off the hook, but there’s one thing they’re still missing… answers. Forced into a confrontation, years of resentments and things long left unsaid rise to the surface as they questions the circumstances that brought them to this point, and what happens to your relationship when the only thing holding you together, threatens to tear you apart.

A timely spotlight on parental grief, Til Death Do Us Part is the debut play of Safaa Benson- Effiom, and was a finalist in the 2020 Theatre503 International Playwriting Award and Soho Theatre’s 2019 Tony Craze award. This is presented as a co-production with Darcy Dobson Productions.

Danielle Kassaraté (The Curious Incident of the Dog in the Night-time, Gielgud Theatre; The Color Purple, Curve Leicester), Richard Holt (Swallows and Amazons, National Theatre; Mr  Popper’s Penguins, UK & US Tour) and Jude Chinchen (Casualty, BBC; Boys, Sky) will bring to life Safaa Benson-Effiom’s powerful debut play Til Death Do Us Part at Theatre503 this May.  Directed by Justina Kehinde (Best of Enemies, Young Vic; UMUADA, Bunker Theatre/King’s Head  Theatre), this portrait of love and loss looks at what happens to your relationship when the only  thing holding you together, threatens to tear you apart.

A finalist in the 2020 Theatre503 International Playwriting Award and Soho Theatre’s 2019 Tony  Craze award, Safaa Benson Effiom has written a searing spotlight on relationships and  parenthood. After 15 years of marriage, Daniel and Sylvia find themselves drifting further apart  with each passing day. When they are abruptly united by every parent’s worst nightmare, the  couple are forced into a confrontation with years of resentment and things long left unsaid  rising to the surface, as they question how on earth they ended up in this position.

Writer Safaa Benson Effiom comments: Til Death Do Us Part was rattling around in my head for  more than six years before I put pen to paper – it’s surreal that I finally get to share it with the  world. It’s a joy to watch Justina and the rest of the creative team bring this play to life in a way I  could never have imagined – I can’t wait for everyone to see it! Having my debut full-length play  staged at Theatre503 is a life-changing moment … an absolute dream come true!

Lisa Spirling, Artistic Director at Theatre503 comments, We’re delighted to welcome another  thrilling new voice to our stage. Safaa’s play speaks to us about love, grief and hope in a way we  haven’t seen before. It’s particularly exciting to be welcoming back one of the graduates of our  Trainee Producer Scheme, Darcy, making her professional debut along with Justina – three exceptionally talented artists, coming together with our support to bring this incredible script to  life.

Til Death Do Us Part is a co-production between Darcy Dobson Productions and Theatre503. This is Darcy’s full-length debut as a producer, as she returns to Theatre503 after her tenure as  Assistant Producer.

Theatre503 is at the forefront of identifying and nurturing new voices at the very start of their  careers and launching them to the industry. They stage more early career playwrights than  another theatre in the world – with over 120 writers premiered each year from festivals of short  pieces to full length productions, resulting in employment for over 1,000 freelance artists  through their year-round programme. They also support writers all year round with  development projects working towards that first full length production as part of the 503Studio.

They provide a diverse pipeline of talent resulting in modern classics like The Mountaintop by  Katori Hall and Rotterdam by Jon Brittain – both Olivier Award winners – to future classics like  Yasmin Joseph’s J’Ouvert, winner of the 2020 James Tait Black Prize and transferring to the West  End/BBC Arts and Wolfie by Ross Willis, winner of the 2020 Writers Guild Award for Best New  Play. Writers who began their creative life at Theatre503 are now writing for series including The  Crown, Succession, Doctor Who, Killing Eve and Normal People and every single major subsidised  theatre in the country now boasts a new play by a writer who started at Theatre503.

A programme that celebrates music as the supreme language of longing and ecstasy.

A programme that celebrates music as the supreme language of longing and ecstasy.
- Advertisement -