The 2,328 seat theatre opened as a cinema in 1930. In the era of ‘super’ cinemas, Provincial Cinematograph Theatres (PCT) invited Ernest Walmsley Lewis to submit plans to build such a cinema a stone’s throw away from Victoria Station. Designing the venue was challenging, especially due to having two major roads running either side of it. Having two frontages was considered very severe; taxi drivers were said to have nicknamed the venue ‘Sing-Sing’.

The interior is unique and a testament to art deco design. ‘Imagine a fairy cavern under the sea, or a mermaid’s dream of Heaven; something one has never seen or thought of before; huge submarine flowers against the walls that branch up and out and throw mysterious light towards the realms above, and glassy illuminated stalactites hanging from the ceiling; and a proscenium like a slender host of silver trees, and silvered organ pipes that shoot up to the roof; while over the whole the lights change from deep-sea green to the colours of the dawn, and from these to the warm comfort sunlight’. Gaumont – British News

The venue has become one of the leading West End venues hosting musicals such as The Sound of Music, Camelot, Fiddler on the Roof, Starlight Express and Saturday Night Fever. WICKED has been casting its spell over audiences across the world for the last decade and continues to be a ‘West End sensation’ (Daily Mail) at the Apollo Victoria Theatre, where it recently played its landmark 4000th performance. 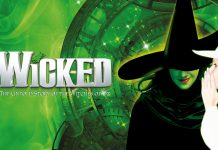 Wicked, the West End and Broadway musical sensation, is the recipient of more than 100...
- Advertisement -
More info