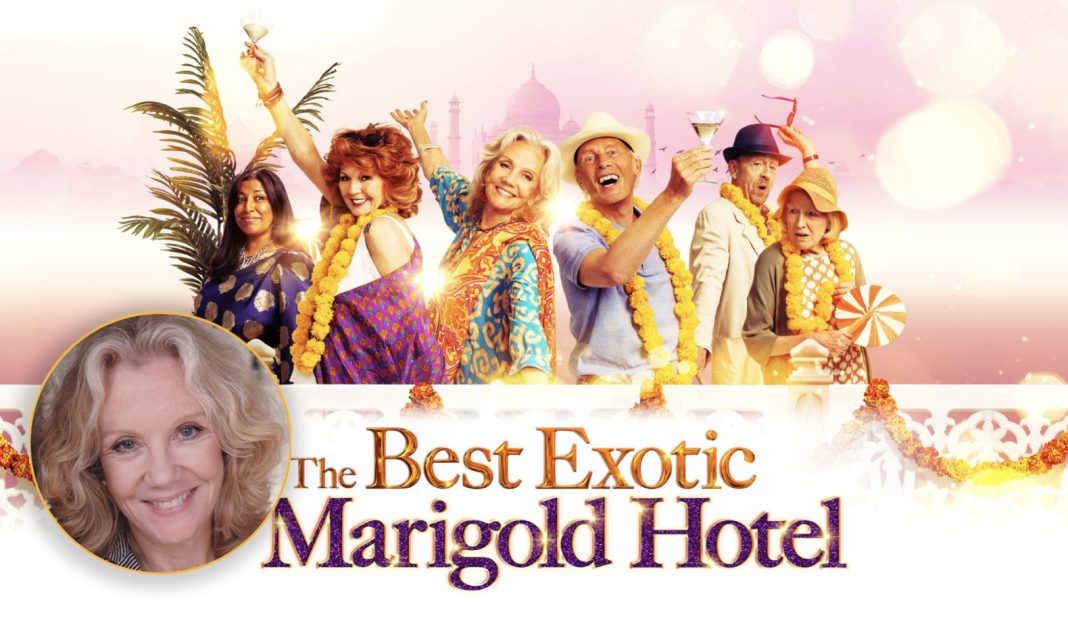 GET READY FOR THE JOURNEY OF A LIFETIME: CHECK IN TO THE BEST EXOTIC MARIGOLD HOTEL

Based on the Sunday Times bestseller which inspired one of this century’s most treasured films, The Best Exotic Marigold Hotel takes us on a journey to India with an eclectic group of British retirees as they embark on a new life. The luxury residence is far from the opulence they were promised, but as their lives begin to intertwine, they are charmed in unexpected and life-changing ways.

The Best Exotic Marigold Hotel is a joyous comedy about taking risks, finding love and embracing second chances, even in the most surprising of places. Get ready for the journey of a lifetime.

What attracted you to The Best Exotic Marigold Hotel?

Because I absolutely loved the script and there wasn’t a shadow of a doubt about wanting to do it. I love the play, the writing, the part and I’m mad about the director Lucy Bailey. It’s a wonderful play and Deborah Moggach is a great writer. Like most people, I was familiar with the title and the story. I had seen the film and there’s something about the story that just gets you. It’s very truthful and it deals with lots of different issues – such as getting older, being on your own – whilst being tremendously hopeful. It’s a reminder that where there’s life there’s hope.

Can you relate to Evelyn in any way?

Absolutely. She’s such a beautifully-written character and I can relate to her age, plus the fact we all look back on our lives realising that we’ve made mistakes. One of my least favourite songs is Frank Sinatra’s My Way. I absolutely hate it. It’s so smug! Who can really say ‘Regrets, I have a few but then again too few to mention’? You’d have to be completely switched off and in your own very selfish bubble.

Dame Judi Dench played Evelyn in the film version. Is it daunting in her footsteps?

If I dwelled upon it then yes, but I don’t. I briefly thought about watching the film again but I decided ‘No, I can’t do that’. She is such a wonderful actress and I couldn’t begin to play it the way she does. That’s what is so fascinating about this business I’m lucky to be in: Everyone brings their own experiences and understanding to a role. But Judi is a consummate actress. I could watch her all day, even reading the telephone directory.

Why do you think this story resonates with people so much?

I think we see ourselves in it. If we’re lucky we’re all going to get old. Then there’s seeing all these characters from different backgrounds, with their own losses and regrets, come to India and start again. It’s a reminder that starting a new life is always possible. I don’t necessarily mean finding another love or another marriage, it’s more about finding a new lease of life, new interests, a new joie de vivre. We can all get into a rut without realising it until we’re jolted out of it, like these people who are forced to go to India for a variety of different reasons – either because they can’t afford to stay in England, they don’t want to go into a care home or their families can’t take them in because they don’t have room. They’re uprooted into this completely different culture. In the beginning it’s a shock but it turns out to be the making of them. It’s such an inspiring story and it’s exactly the right time to tell it now because it’s about the indomitable human spirit.

Can you relate to the theme of starting over or have you had a pretty steady ride?

[Laughs] Come on! Life is not a steady ride for anybody. My goodness, there are peaks and valleys, ups and downs, feast and famine. That’s part of life and you have to weather the storms.

Do you feel enough stories are being told about the older generation?

No, there aren’t. People think ‘Old people are boring’ or ‘I’m not interested in their stories because all the people they talk about are going to be dead’. But I’m in my 70s and I don’t feel as if I am that age, and I realise that’s how other old people feel too. We don’t feel old at all. [Laughs] We just look it and that’s why we all avoid the mirror.

Have you worked with any of your co-stars before?

You’ve had such a varied career. What have been your highlights?

The first film I ever made was Tiger Bay with my father and that was a masterclass in film acting. I didn’t go to drama school, which I probably should have done later, but I was incredibly lucky to work with some incredible actors, my father included. I’m also very proud of some of the plays and musicals I’ve done over the years. I love to take on a challenge because it frightens the life out of me, that idea of ‘I don’t know if I’m going to be able to do this’.

What are you most looking forward to about taking The Best Exotic Marigold Hotel around the country?

It’s great fun when you’re lucky enough to be in with a good company, which this is. We’re all enjoying the rehearsal process and everybody loves Lucy Bailey. We’re excited about being in a show that is going to give people a lot of pleasure and I love turning up at a new town or city and finding my digs, exploring the theatre, the opening night in a new venue – it’s very exciting. I like investigating new places, going for walks, having nice lunches. Being on the road and away from home can be hard and I always travel with my own pillow, but touring is also really rewarding.

What do you hope audiences take away from seeing the show?

I hope they’ll feel infused with optimism and hope about the future as well as the belief that life really is what you make it. There are so many things dragging us down in the world today. We’re going through dire straits but then when you look back over history you see what people went through in the First and Second World Wars, the Depression, what have you. The world has gone through some very tough times but I believe in the goodness of the human race. I believe in our incredible ingenuity. We just all have to play our part and do what we can.

Based on the Oscar winning DreamWorks film, the Broadway and West End smash hit Shrek the Musical is a fun filled and hilarious musical comedy with a cast of vibrant characters and a ‘shrek-tackular’ score.
- Advertisement -