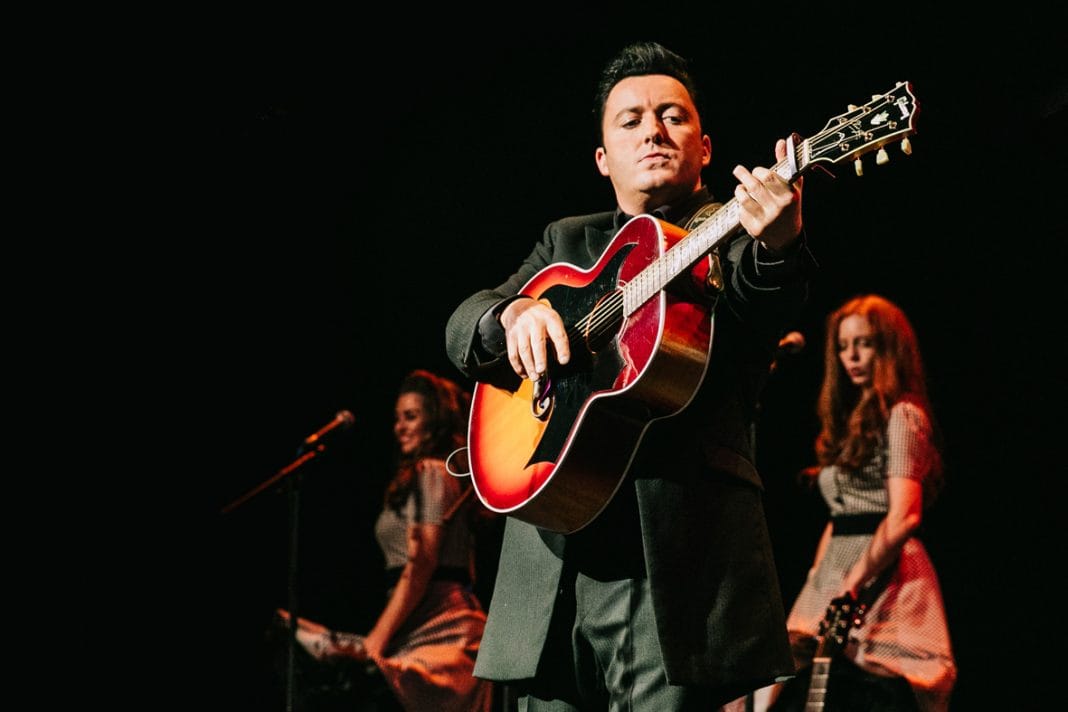 THERE’S only one Man in Black and he’s back as the Johnny Cash
Roadshow returns on Thursday 16 January!

Award-winning frontman Clive John is joined by the amazing Emily Heighway as
June Carter in the ultimate tribute show endorsed by the Cash family. Join them for
all your favourites including Ring of Fire, Hurt, I Walk the Line and of course The Man in Black!

Neil Collins chats to Clive John, who performs Johnny Cash classics on instruments once owned by the man himself!
What is your favourite Johnny Cash era?
My favourite era was late 60s through to mid-70s – although there was something great in every period of his career.

What is the structure of the concert?
A lot of the hits and favourite tracks are also included in the evening and it’s always fun! Alongside Man in Black, I Walk the Line, Ring of Fire and A Boy Named Sue are some of the darker, more atmospheric songs from the later American Recordings such as The Man Comes Around and Hurt making this year’s show an emotional roller-coaster of songs through Cash’s career.

Tell us about a typical day in the life of a tribute artist, especially one as
extraordinarily charismatic as Johnny Cash. Are there preparations you make
before every gig to get into his mind-set? I’m guessing you will have studied
hundreds of hours of tape to replicate his every mannerism?
As I often say – my show is not an absolute copycat of Johnny Cash. I have created
a celebration of him and have surrounded myself with a team of musicians, who
have become my best friends and who share the same goal to create a show with
the upmost respect for Johnny Cash, but do it in our own unique way.
Of course I have watched hours on end of Johnny Cash footage and feel I
understand – to a certain extent – the way he was in his heart as well as just
studying his mannerisms. As soon as I hit the dressing room and put on the black
suit after sound-check, I am in show mode.

Describe your earliest memories as a Johnny Cash obsessive.
It was all I could think about for a few years!

How did the Johnny Cash Roadshow come about? Did you ever anticipate it
becoming such a successful and enduring show?
After watching the film Walk the Line, I decided to put a basic band together and do
an evening of just Johnny Cash songs. The excitement in the room that night was far
too invigorating to not do it again. So I did it again, and again, and again…
It naturally just evolved into a bigger and better show and it still is 13 years on. We
now tour all over the UK, Ireland and pretty much all European countries. I never
dreamed it would turn out the way it has.

You were gifted with some original Johnny Cash harmonicas, and you now
own a beautiful Clive Gibson guitar – one of only three in the world. You must
be pinching yourself as such a big fan to be playing the music you love on
such rare and special instruments live onstage?
Yep, I have to pinch myself nearly every night. Sometimes it feels like it can’t be real,
but every day it keeps on happening so it must be.

Tell us about your experiences meeting members of the Cash family. They
have often been glowing in their praise about the show.
I met Johnny Cash’s granddaughter, Caitlin Crowell at a show in Altrincham a good
few years back and we had a good chat in the interval and after the show. The
venue manager came down to the dressing room before the show and said there
was a lady in her early thirties at the Box Office claiming to be Johnny Cash’s
granddaughter and she wanted some complimentary tickets.
I thought it was someone pulling my leg, but said yes anyway and sure enough it
turned out to be true! My soundman brought her around to the dressing room area in
the interval and first thing she said was “Oh my God, he’s just like me Grandpa” in
her American accent.  She emailed me several times after that night.

Can you remember where you were the day Johnny Cash sadly passed away
in 2003?
I was playing a gig at Huntingdon Hall in Worcester. In those days I was just doing
my own material and more Celtic/acoustic rock material, but Ring of Fire was on our
setlist so we dedicated it to Johnny.

What are the hardest traits of Johnny Cash’s performance to master? Are
there any songs that are particularly difficult to nail live?
Johnny Cash combined singing and talking on a lot of songs, and this is more
difficult to do properly than it sounds. I have heard other guys impersonating Johnny
Cash and they usually over-emphasise the American-talking accent and end up
sounding more like John Wayne!
I would say Hurt is one of the most tricky songs to nail live as it needs to be
performed with complete real emotion and fragility otherwise it just sounds wrong.

How far are you willing to go to inhabit the role? Have you ever felt inclined to
adopt any of his lifestyle traits?
Well, I like a beer and a cigarette (no illegal drugs though!)

Johnny Cash has inspired countless artists, and in the latter part of his career
he recorded cover versions of songs by several contemporary artists
including U2, Depeche Mode and Nine Inch Nails. This period of his career
introduced Johnny Cash to a whole new generation of fans including a
headline slot at Glastonbury 1994. Ring of Fire is still sang as a football chant
at grounds like Anfield meaning his music has truly transcended into the
popular consciousness. What made him so unique and universally acclaimed?
He lasted 50 years of recording and performing his music whilst he was alive. All this
work and passion won’t ever disappear – not in our lifetime anyway. Johnny touched
people’s souls, he wasn’t just another commercial act. You can’t pigeon-hole him
either. He spans a lot of music styles and age ranges. He was the real thing and
always will be.

In a nutshell, what makes the Johnny Cash Roadshow unmissable?
Our enthusiasm, energy, love and musical accuracy for what we do. It is an evening
of flowing songs and good humour. It’s never the same talking about it third hand –
you need to come and find out for yourself!

“Clive sings moves and acts just like The Man in Black. The Johnny Cash legend will continue”