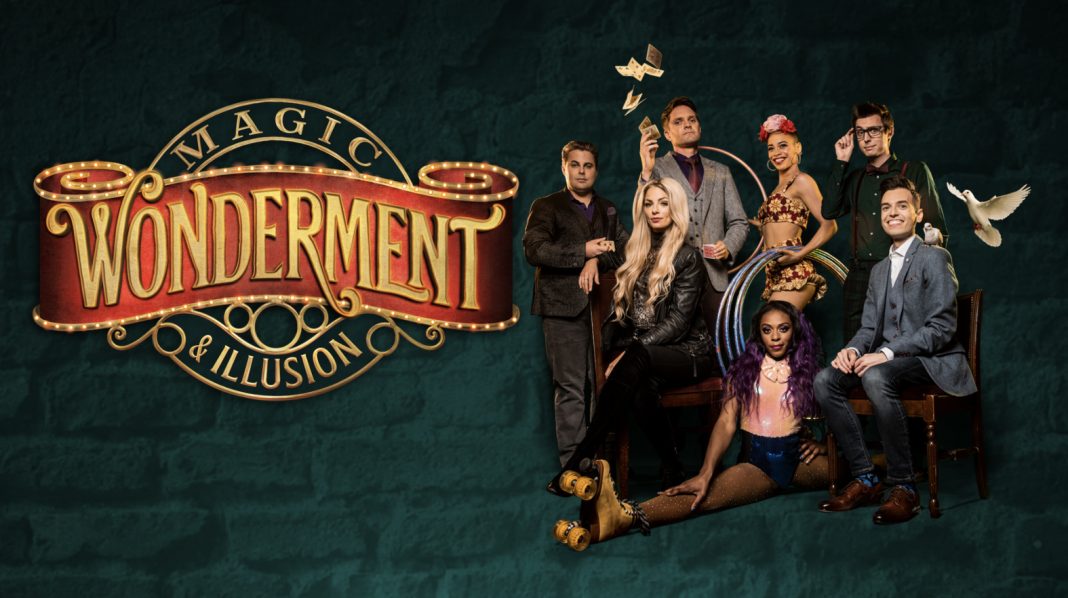 The line-up of headline acts for the brand new vaudevillian journey of illusion, Wonderment:  Magic & Illusion, is now complete. Joining previously announced Chris Cox (Chris Cox’s Mind  Boggling Magic, CBBC) and Josephine Lee (Britain’s Got Talent, ITV) will be Young & Strange, Edward Hilsum and Amazi and Symoné (who will split the run with their hula hooping finesse). Set to astonish audiences with breath-taking illusion and amazing acrobatics, Wonderment: Magic & Illusion will bring variety performance in the West End bang up-to-date with performances from artists at the cutting edge of their crafts.

Young & Strange comprises stage illusionists Richard Young and Sam Strange. Alongside live  performance, the pair creates online video content to showcase original and exciting formats for  magic. When the duo videobombed the background of a live Sky News broadcast, the clip went viral with over 20 million views across various platforms in just a few days. With credits  including Penn & Teller: Fool Us and ITV1’s The Next Great Magician, the pair also headline the world’s largest international touring magic show Champions Of Magic.

For five years, Edward Hilsum starred alongside Young & Strange in the record-breaking  Champions of Magic. His original shows have received acclaim from the Edinburgh Festival  Fringe to Las Vegas and he was invited to be part of the opening ceremony of the London  Olympics. In 2020, Edward Hilsum completed an unprecedented hat-trick by becoming the first  person to win all three of The Magic Circle’s competitions and more incredibly, to hold all three  titles at the same time!

Performing from 16th – 26th July and 18th – 28th August will be Amazi. An international hula hooper, she’s performed at the National Theatre, the Tate and Glastonbury Festival as well as for Children in Need and BBC’s Crackerjack. Symoné will take to the stage from 28th July – 16th August, combining hula hooping, roller skating and dance with psychedelic style. She has performed for clients including Instagram, ASOS, Kate Nash, and Sun Ra’s Arkestra. They both currently hold a Guinness World Record with their hoop troupe, Marawa’s Majorettes.

These incredible acts join the multi-award-winning mind reader, Chris Cox, and the most talked about woman in magic, Josephine Lee. Chris Cox has sold out UK tours and runs at Fringe Festivals from Edinburgh to New Zealand, and is the only mind reader in history to have played  the West End, Broadway and Sydney Opera House. Josephine Lee took the magic world by storm after her appearance on Britain’s Got Talent. Her dynamic, modern spin on illusion saw  her act hit millions of views overnight.

Director, Annabel Mutale Reed comments, It’s an absolute privilege to be creating  Wonderment: Magic & Illusion with world class performers, who are bringing their greatest acts to the West End this summer. Audiences have been making memories at The Palace Theatre for 130 years, and we are delighted to be filling its stage with a vibrant 2021 twist on an old fashioned variety show. It is an exhilarating show that really has to be seen to be believed!

Wonderment: Magic & Illusion brings together some of the greatest entertainers live on stage  with performances that will electrify, surprise and delight. They will be supported by an  ensemble made up of Louise Douglas, Annalisa Midolo, Lee Pratt and Mervin Noronha.

Guest acts are still to be announced!