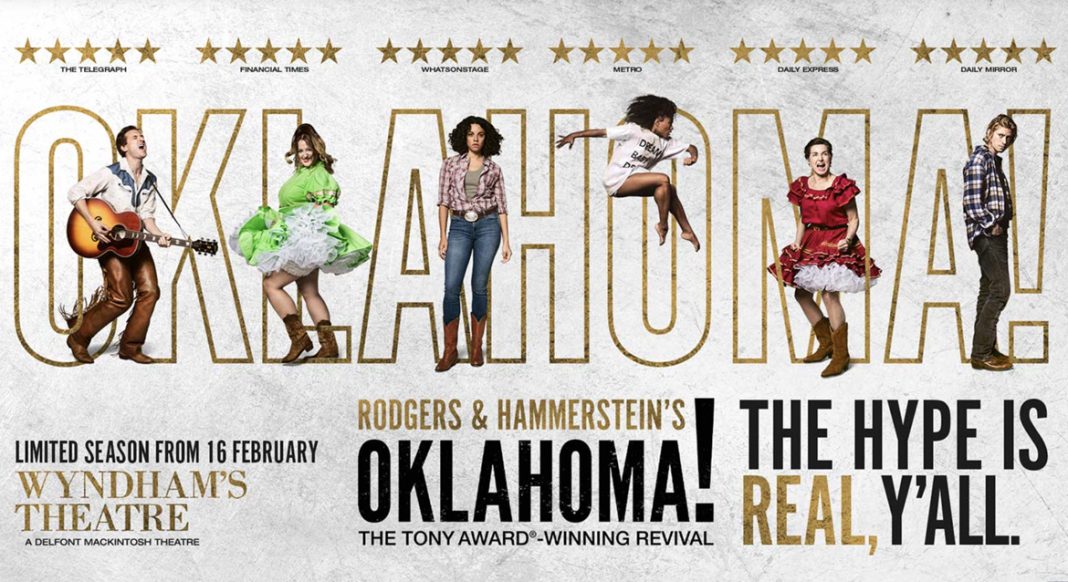 in association with the Young Vic Theatre present

Based on the play “Green Grow the Lilacs” by Lynn Riggs

Forget what you think it is… this is Rodgers & Hammerstein’s Oklahoma! as you’ve never seen it before – re-orchestrated and reimagined for the 21st century. Winner of the Tony Award for Best Musical Revival, Daniel Fish’s bold interpretation recently enjoyed a sold-out run at the Young Vic following sold-out runs in New York and across the U.S. on tour.

Oklahoma! tells a story of a community banding together against an outsider, and the frontier life that shaped America. Eighty years after Rodgers & Hammerstein reinvented the American musical, this visionary production is funny and sexy, provocative and probing, without changing a word of the text.

After long and highly distinguished careers with other collaborators, Richard Rodgers (composer, 1902-79) and Oscar Hammerstein II (librettist/lyricist, 1895-1960) joined forces in 1943 to create the most successful partnership in American Musical Theater. Prior to joining forces, Rodgers collaborated with lyricist Lorenz Hart on musical comedies that epitomized wit and sophistication (Pal Joey, On Your Toes, Babes in Arms and more), while Hammerstein brought new life to operetta and created the classic, Show Boat, with Jerome Kern. Oklahoma!, the first Rodgers & Hammerstein musical, introduced an integrated form that became known as “the musical play.” Their shows that followed included Carousel, South Pacific, The King and I and The Sound of Music. Collectively, the Rodgers & Hammerstein musicals have earned Tony, Oscar, Grammy, Emmy, Pulitzer and Olivier Awards. The Rodgers & Hammerstein Organization is a Concord Company.

Daniel Fish is a New York-based director who makes work across the boundaries of theatre, film, and opera. He draws on a broad range of forms and subject matter including plays, film scripts, contemporary fiction, essays and found audio. His 2019 production of Rodgers & Hammerstein’s Oklahoma! transferred to Broadway from St. Ann’s Warehouse and won the Tony Award for Best Musical Revival. Other recent work includes White Noise, inspired by the novel by Don DeLillo (Ruhrfestspiele Recklingshausen, Theater Freiburg, Skirball NYU), Most Happy, based on Frank Loesser’s “The Most Happy Fella” (Williamstown Theater Festival), Michael Gordon’s opera, Acquanetta (Prototype Festival/Bard SummerScape), Don’t Look Back (The Chocolate Factory), Who Left This Fork Here (Baryshnikov Arts Center, Onassis Center), Ted Hearne’s The Source (BAM NEXT WAVE, LA Opera, San Francisco Opera), and Eternal, a video installation. His work has been seen at theatres and festivals throughout the U.S. and Europe including, The Walker Arts Center, PuSH, Teatro Nacional D. Maria, Lisbon/Estoril Film Festival, Vooruit, Festival TransAmériques, Noorderzon Festival, The Chocolate Factory, The Public Theater’s Under The Radar, Opera Philadelphia/Curtis Opera Theater, American Repertory Theater, Richard B. Fisher Center at Bard College, Yale Repertory Theater, McCarter Theater, Signature Theater, The Shakespeare Theater Company, Düsseldorfer Schauspielhaus, Staatstheater Braunschweig, and The Royal Shakespeare Company. Residencies and commissions include The MacDowell Colony, Baryshnikov Arts Center, Mass MOCA, and LMCC/ Governor’s Island. In December 2022, he will première a new production of Leonard Bernstein’s Candide for Opera National de Lyon. He is graduate of Northwestern University’s Department of Performance Studies and has taught at The Juilliard School, Bard College, and The Department of Design for Stage and Film at NYU Tisch School of the Arts.  He is the recipient of the 2017 Herb Alpert Award in the Arts for the Theater.

Upcoming at the Delfont Mackintosh Theatre's

Eshaan Akbar brings us his debut tour, The Pretender.

Tim Peake: My Journey To Space

Fasten your seatbelts and get ready for an awe-inspiring ride.
- Advertisement -