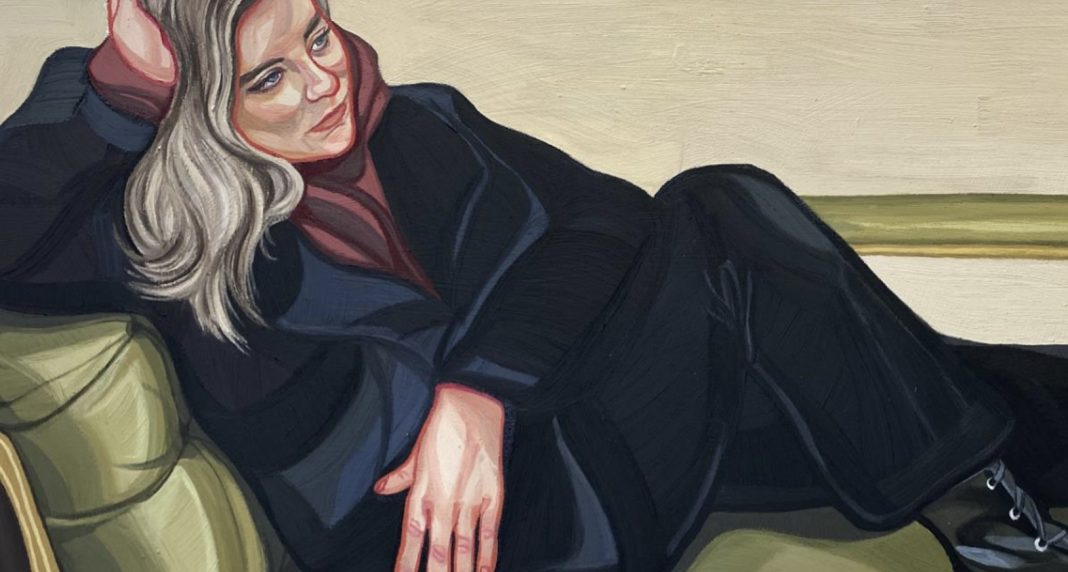 Rising star of the UK art scene, Ania Hobson will showcase new work at her debut London solo exhibition. The artist will unveil an exciting collection at The Catto Gallery this September where, in her newest set of paintings, she builds on the contemporary figurative style that won her national acclaim.

Two years ago, Hobson won the Young Artist Prize at the BP Portrait Awards at the National Portrait Gallery with A Portrait of two Female Painters. A striking example of the strong, independent millennial women that feature prominently in her work, her entry was chosen from an initial submission of 2,667 pieces from artists in 88 countries.

Painting women in workwear and chunky boots – often chosen by the artist herself – her sitters have an insouciant quality that speaks to an era of rising female consciousness. She strives to avoid perfection, preferring to exaggerate her figures and allowing her emotions and experiences to guide her work.

Hobson comments, I like celebrating modern day women but I avoid painting them in a stereotypically feminine way. Women artists are now breaking through and becoming recognised for what we do, and I want to be part of that movement. I am trying to make my mark in a man’s world and I want to help portray women as strong, world-changing creatures. This is a big moment for me. I could not be more thrilled to have my first solo show at a major UK gallery.

The great-granddaughter of the well-known Polish painter Edward Trojanowski, Hobson began painting at an early age. The East Anglian artist graduated with a degree in fine art from Suffolk University in 2011. She then went on to study at the Princes Drawing School in London and the Florence Academy of Art in Italy. Hobson was invited to exhibit at the Venice Biennale 2019, as part of a group show called Personal Structures – Identities.

Getting there The gallery is a 2-minute walk from Hampstead underground station on the Edgeware branch of the Northern line. Once you exit the station, turn right and keep walking up the hill. You will soon see it on your right.

Established in 1986, Catto Gallery has grown to become one of the most prestigious fine art galleries in London, specialising in the best of contemporary art across all mediums. Taken over in 2009 by Iain Barratt and Imogen Green, having between them over 30 years’ experience as art dealers and art consultants. The gallery hosts around 12 solo and joint exhibitions a year. Catto Gallery is situated in the beautiful village of Hampstead. The gallery underwent an extensive refurbishment in 2010, also adding a smaller additional gallery in the basement known as ‘Catto Below’. This extra space allows Catto Gallery to hold exhibitions, often by lesser known, sometimes more experimental artists, to run alongside the main solo shows upstairs. New exhibitions are held approximately every 3 weeks throughout the year, showing unique works by leading artists from around the world.