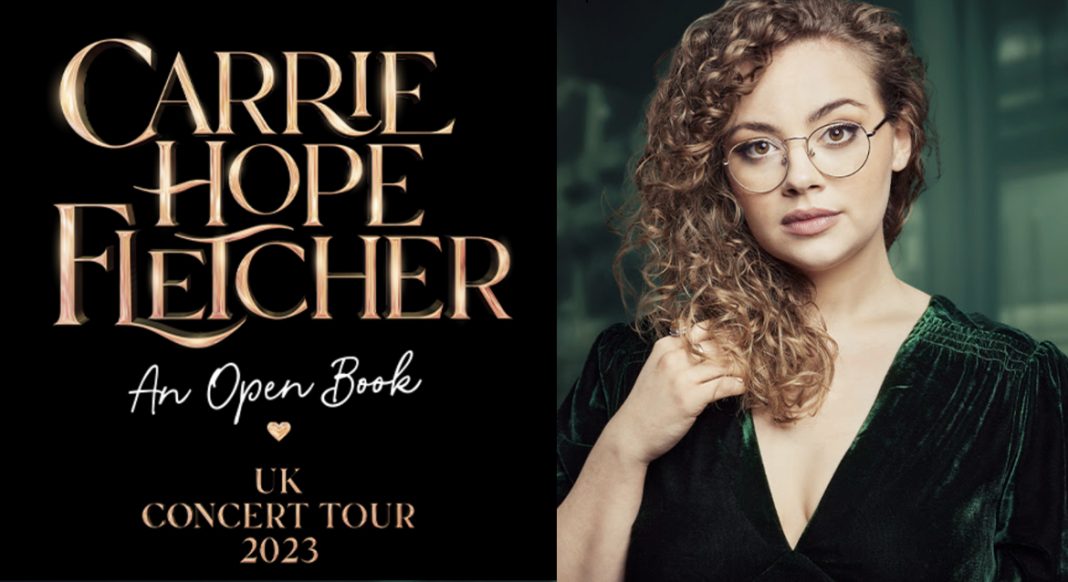 Actress, author,vlogger and award-winning West End sensation Carrie Hope Fletcher is heading out on her first ever UK tour.

Carrie Hope Fletcher-An Open Book will see the musical theatre star play a series of unmissable theatre shows in May and June 2023 Performing songs from her incredible career expect fan favourites including hits from Heathers, Les Miserables, The Addams Family and many more interspersed with chat about Carrie’s fascinating life and career.

28 May Salford, The Lowry BOOK NOW

Speaking about Carrie Hope Fletcher – An Open Book, Carrie said: “I am absolutely thrilled to be taking on my first ever UK tour. This is something I have wanted to do for some time and next year presents the perfect opportunity. I absolutely adore being on stage and am fortunate to have performed across the West End and overseas, but there’s something very special about theatres around the UK so I can’t wait to get out on the road and visit these absolutely fantastic and beautiful venues.”
Currently wowing West End audiences in the title role of Andrew Lloyd Webber’s Cinderella, Carrie-who has an impressive three WhatsOnStage Awards-has enjoyed a breath-taking career since her West End debut at the age of nine playing Young Éponine in Les Misérables. Since then Carrie’s theatre credits include Fantine in Les Miserables: The Concert, Veronica in Heathers,Wednesday in The Addams Family, Eponine in Les Misérables, both Truly Scrumptious and Jemima in Chitty Chitty Bang Bang, Beth in Jeff Wayne’s War of the Worlds and Jane Banks in Mary Poppins. And when she’s not treading the boards of the West End’s biggest stages Carrie is also a best-selling novelist, Top 20 recording artist and respected vlogger with her popular self-titled music and vlog channel attracting more than a million views a month. Carrie Hope Fletcher-An Open Book is presented by Lambert Jackson.
Jamie Lambert, of Lambert Jackson, said: “Carrie Hope Fletcher-An Open Book presents an opportunity to take one of the West End’s most celebrated and successful leading stars to theatres across the UK. Not only will audiences be wowed by the stunning voice of Carrie, they will also get an insight into her incredible career and that is not tobe missed.”
Cuffe and Taylor Director of Theatre Touring Ben Hatton added: “We are very excited to be presenting Carrie’s debut UK tour. “She is the most wonderful musical theatre talent and so much more. Audiences will absolutely love this show.”