Home An Interview with John Cleese Bang Bang! - A Farce By John... 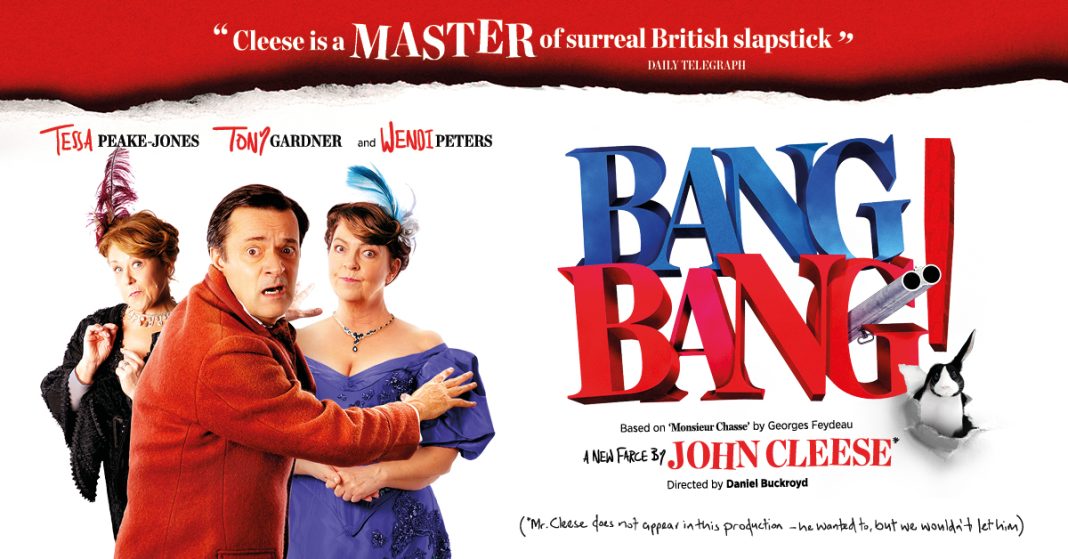 A new farce from John Cleese, as he makes his stage writing debut with a hilarious new adaptation of this classic comedy. A delicious blend of French Farce and Fawlty Towers. Cast will include Tessa Peake-Jones as Leontine, Tony Gardner as Duchotel and Wendi Peters as Madam Latour.

Watch the trailer and find the tour details here

When Leontine, a respectable society lady, discovers that she’s been hoodwinked by her husband, Duchotel, who’s always pretending to go hunting but really chasing after other ‘prey’, she vows to take revenge on the philanderer! But while Duchotel’s away, his lifelong fried comes calling – and he’s on the hunt too. Will Leontine get caught in his sights, or instead set a trap of her own? Secrets unravel as the devilish Duchotel finds himself snared in a door-slamming, trouserdropping, balcony-climbing night of chaos set amidst the stylish apartments of Paris.

Tessa Peake-Jones became a household name with her role as Raquel in the iconic comedy Only Fools and Horses. Her extensive stage work encompasses the National Theatre and RSC, recent credits include The Winslow Boy and Shirley Valentine.

Tony Gardner first made his name in comedy as part of the award-winning comedy duo Struck off and Die. Since then he has appeared on TV in roles ranging from My Parents are Aliens to Last Tango in Halifax and on stage in Alan Ayckbourn’s classic Bedroom Farce.

Wendi Peters is most widely known for her role as Cilla Battersby in Coronation Street and is currently appearing in the West End smash-hit musical Big.

Completing the cast are Vicki Davids as Babette, Richard Earl as Moricet, Daniel Burke as Gontran, Andy Secombe as Cassagne/Policeman, Simon Desborough as Inspector Bridois and Mikheal Deville as Policeman.

John Cleese says “I am delighted to be working with Exeter Nothcott Theatre and Dermot Mclaughlin to bring Bang Bang! to stages across the country with such a talented cast. Farce is my greatest love – Fawlty Towers consisted of 12 farces – and I think UK audiences will love this hilarious classic.”

Daniel Buckroyd, Artistic Director & Chief Executive at Exeter Northcott Theatre says “We’re thrilled to be working with this fantastic team to launch this first UK tour of Bang Bang! here at the Northcott Theatre; partly because it’s such a funny script and we’ve assembled such a great cast, but also because regional producing venues are the life-blood of UK theatre – developing talent, growing audiences, providing the beating heart of a vibrant creative regional city like Exeter – so we’re proud to be flying the flag for theatre ‘Made in Devon’ across the country.”

The show will be at The Orchard Theatre from Tuesday 14 till Saturday 18 April. Pre-show dining is also available before the show. The Orchard Theatre’s Restaurant provides a delicious range of, unique and memorable dishes, using the freshest local produce and prepared daily by the Head Chef. Reserve your table when booking your show tickets.

To book tickets or for more information visit orchardtheatre.co.uk or call the Ticket Office on 01322 220000

JC: I’ve always loved farce. I also love that farce is constructed, when its good, in an incredibly clever way – a really great farce, like the French farces of 1900. And I like the theatre because in farce, there’s a lot going on and you can’t pick it up with just one camera. If you try to shoot a wide shot for television its too wide, but if you’re sitting in an audience you can see the whole stage and you can see him and her at the same time, and see them interact – without some editor choosing what you’re going to see. Farce in the theatre is, I think, the thing that makes me happiest.

What makes a good farce?

JC: I think the key elements of a farce are the structure of the plot and if I was to give advice to young people who are interested in farce, what I would say is get the story right – before you start writing the dialogue. When Connie and I were writing Fawlty Towers, we didn’t write any lines of dialogue for about 2 and a half weeks. We just sat trying to figure out what made the plot work. A lot of writers almost come up with a straight plot and then they have to write lots of a jokes, because the situation is not very funny – but if you can write funny situations then writing the dialogue is easy because you just have to act out that situation.

JC: Well I lecture on creativity and I’m absolutely convinced that everything that’s really original comes from the unconscious – you don’t have control. This means that you have to understand how the creative process works, which is that you have to get in a state of mind where you can keep focus on what you’re doing – without it being a furrow-brow, studying-late-into-the-night intensity. And why the people who commission scripts often get it wrong so much, is that they don’t give writers enough time. So they are immediately saying ‘I want something Wednesday week’ and the reality is if you want something Wednesday week I don’t have time to think of anything original. Why should people come and see Bang Bang? JC: Well you know what they say about buying property don’t you, there’s three things… location, location, location. And the only reason, the only reason, anyone should come to Bang Bang! is to laugh, to laugh and to laugh.

Can you sum up the show in one sentence?